April 11, 2013
By Grania Litwin – TIMES COLONIST
Unlike some couples, Andrew and Christa Fox never fantasized about building their own home.
“The idea just unfolded,” recalled Christa, who explained they came to that conclusion after months of house hunting, following their decision to retire to the West Coast. 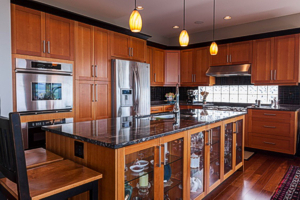 The kitchen island is a handsome china cabinet. Above it are delicate pendant lights. “It doesn’t matter how beautiful a home is, if you don’t have good lighting, it won’t look great,” said designer Wendy Wilson, who used recessed lighting, wall sconces, pendants and multi-level lighting to set the mood.
Photograph by: Debra Brash

The former Calgarians looked at old homes and new homes, and even considered doing major renovations, since Andrew had been in commercial construction all his life, but decided against it after adding up all the costs.

Although it’s not uncommon to hear about couples going through all kinds of battles as they build a home, Christa said they never experienced that. “It was a very, very good experience for us.” 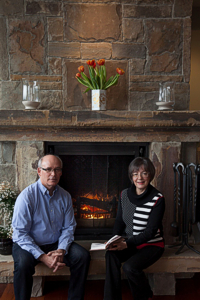 Andrew and Christa Fox fell in love with the Cowichan Valley when they retired there from Calgary.
Photograph by: Debra Brash

They spent two years planning, visiting show homes and reflecting on their needs. Their goal was never to create a showcase, Christa said “We just wanted a comfortable place for family and friends.”

Andrew agreed that the process went very smoothly. “We came in within four per cent of our budget and were extremely happy with our builder, K2 Construction,” he said, noting they originally thought of settling in an urban area, such as Nanaimo or Victoria, but fell in love with the Cowichan Valley.

“The people here are so genuinely friendly, and we love the restaurants and all the artists,” said Christa, whose career was in educational leadership.

“Her husband can’t get over the peace and quiet of their new home. You don’t hear a sound here except nature. When we were in Calgary, I’d get up at 5 a.m. and already you could hear the buzz of traffic starting up.” 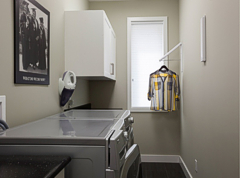 They hadn’t been in the valley long before they discovered culinary destinations such as the Saison Market, Hilary’s Cheese, the organic Teafarm, vineyards, organic bakeries and Bill Jones’s Deerholme Farm.

“I love the way you drive out into the middle of nowhere, along these rough, bumpy roads, and suddenly you’re in this incredible, elegant place enjoying some fantastic food,” said Andrew. No wonder people call it the Provence of Canada. 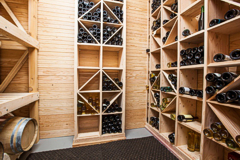 Andrew Fox has started making his own wine since moving to the valley.
Photograph by: Debra Brash

“Since they both previously had challenging careers that required long hours,” Christa said, “their overriding desire was a retirement home where they could relax, connect with a community and do meaningful volunteer work, since that’s their passion.”

“The owners wanted an extremely calm space, so we chose colours to reflect that”

A major shift in thinking came when they settled on their new home’s size. Their previous 30-year home was 1,300 square feet and they anticipated building about the same. But designer Bruce Johnson of Pacific West Home Design suggested a two-storey house, since they were building on a slope and could take advantage of views on two levels. As a result, their new home features 1,500 square feet on each of the two levels.

The dining table and chairs were also made locally, as was the coffee table.
Photograph by: Debra Brash

Wendy Wilson of Unique Interiors helped with the interior design and exterior colours.

“We would occasionally stumble off in some direction, and Wendy would bring us back on track,” joked Andrew, who noted they originally wanted an emerald-green master bathroom, but opted instead for neutral grey and white marble, with splashes of green as an accent.

“The owners wanted an extremely calm space, so we chose colours to reflect that,” said Wilson, adding they also wanted some Oriental design elements and lots of windows. 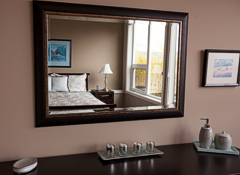 The downstairs guestroom has lovely views and a private garden.
Photograph by: Debra Brash

Light flows into the kitchen through rows of glass blocks installed behind the sink, creating a prism effect in the sunshine. And all the main rooms offer expansive 180-degree panoramas overlooking Lake Quamichan.

Moving was less stressful than the couple imagined, partly because they had spent two years planning and purging. 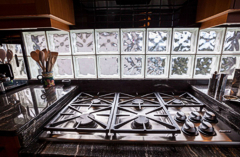 A clever glass block backsplash, and sunken range, make it easier to see into big pots.
Photograph by: Debra Brash

They brought almost nothing with them because their previous home was very traditional, and scoured the valley for interesting, locally made West Coast pieces instead.

“It was really amazing how much we bought locally in this small community,” Christa said. “I never thought I’d be buying furniture from places with names like Uncle Albert’s or Whippletree Junction, but we did.”

Corner drawers were custom made by Gillingham Cabinets, along with all the other kitchen and bathroom cabinets and built-ins.
Photograph by: Debra Brash

Before moving here, they also jettisoned all their business suits. “The last thing I wanted to do was waste space on clothes. I like to dress well, I like quality, but I don’t need a lot. Books are more precious.”

The couple decided to build a small library off the front foyer, rather than an enormous ensuite off the master bedroom, and their designer suggested sliding shoji screens to save space and add a little Asian flavour. 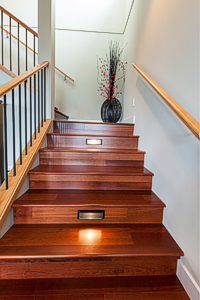 Extra wide stairs with inset lights are a beautiful addition for the owners, and for aging parents who visit frequently from Calgary.
Photograph by: Debra Brash

They made another break from tradition in the kitchen, when they decided not to use the island primarily as an eating bar. “We have such a great view” who would want to sit with their back to it?”Christa said. They made the island into an attractive china display cabinet with a small area at just one end for stools.

Designer Johnson said he is often the “exclusive thought process” on a project, but not this time. “These owners were wonderful to work with because they had very clear ideas about what they wanted. I was there to facilitate their wishes. This property is all about spectacular views across the valley, so we maximized those by going as wide as we could on two levels.” 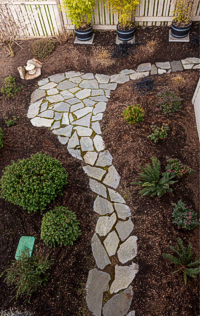 A stone path leads through the easy-care garden.
Photograph by: Debra Brash

A lower level ended up being a blessing, as the owners’ parents are in their late 80s and 90s and often come to stay. A lighted staircase leading to the lower level was made extra wide, in case they need to install a lift one day, and Andrew is happy to have a full-height basement for the first time.

“In Calgary, we had a crawlspace where I went around on my hands and knees. I am so glad to have a full-height lower floor where I can stand up,” said Andrew, who is using one of the rooms to make wine.

He also insulated all the interior walls for sound and put rigid insulation under the basement slab to keep the lower floor cozy. He is enjoying the milder climate since moving here three years ago.

“We used to barbecue in Calgary, but it was such a lot of work in winter, taking the barbecue in and out of the garage. It’s such a treat here, barbecuing all year round. In Calgary, we had nice deck furniture but could only use it one month of the year. Here, our deck is like a big outside living room.” 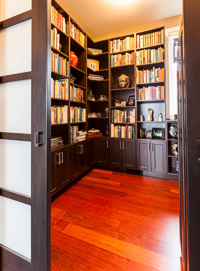 The owners chose to have a small library with shoji screen entry, rather than a large walk-in closet. Photograph by: Debra Brash

They have a bench by the front door, too, to take advantage of early spring sunshine and morning coffee outside. “There isn’t any part of the outside that we’re not using, now that we understand the climate and house position,” said Christa, who notes they had always lived in a big city.

“You learn a lot about yourself when you decide to live somewhere else. You become more aware of what your needs are. We didn’t want to be isolated in our retirement, but we didn’t want to be in a condo or a gated community either. We thought of living on a golf course, but that seemed too manicured, too perfect. 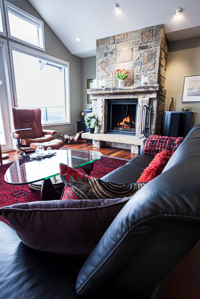 Wendy Wilson of Unique Interiors helped the owners with interior design and choosing the exterior colours.
Photograph by: Debra Brash

“Once you have the option of moving and retiring, boy, you start to explore who you are. We talked to a lot of people; we listened and learned a lot. We decided we wanted to focus on things that are meaningful, to contribute to our community, and live an enriched life. And I’m not talking about money.”